Have you ever been to the Wright Brothers Memorial?  This National Park and Monument recognizes the land where the first official flight by the Wright Brothers took place.  Here are a few little known facts about the park located right here on the Outer Banks!   If you’ve never been there, plan to check it out on your next visit.  It’s fun and history for visitors of all ages!

When the Wright Brothers sent word that they made their first official flight, it came from the telegraph office located inside the Kitty Hawk Lifesaving Station a few miles away.    Kill Devil Hills was not establlished as an offical town until the 1950s, so Kitty Hawk was given the credit as the location of the first flight in 1903.

2.  The Hill Had To Be Stabilized

The original ‘hill’ where the flight trials took place was originally nothing but a sand dune, like hundreds of other dunes in the area at that time. When the government decided to erect a granite monument on that spot, they realized they needed something more stable than just sand to prevent it from shifting.  They added dirt and more sand to the hill, building it up to the height it is today. The whole community got involved with the stabilization process. Children were even paid a penny for each bucket of dirt they brought to the hill.  Once the hill was the right soil consistancy, they planted grass, anchoring it to the spot. Today, this hill is officially known as the “Kill Devil Hill,” named after the town that surrounds it.

3.  The Welcome Center Is Done In Art Deco Style

The visitor center (which is currently undergoing restoration this year) was considered an ultra-modern design when originally built in the 1920’s. It was part of the Park Service’s “Mission 66” program dedicated to modernization and expansion. The architectural firm of Rogers & Poor were the ones behind it’s unique art deco style. In 1966, it was inducted into the U.S. National Register of Historic Places.

4.  It Was The First Federal Park To Have A Permanent Public Structure

Prior to the Wright Memorial’s Visitor Center, National Parks didn’t have public structures on them. Instead, they had ranger stations, entrances, and other similar outcroppings, but no buildings for the public to enjoy. When they created Wright Memorial, they realized that nature and the boulder markers alone weren’t going to be enough to tell the Wright’s story, so they commissioned a museum to tell the rest.

5.  The Inside Of The Monument Is Hollow

The 60 foot granite monument was built in 1932 and dedicated to the Wright Brothers while brother Orville was still living. Though it looks solid, it’s actually hollow with a black granite floor. When it was originally built, it was intended to be open to the public as an extension of the museum. Two alcoves inside originally held the busts of the brothers that now appear outside.  Narrow stairs lead upward, letting you see the entire park from the top of the monument.  With the combined height of both the hill and the structure itself, it’s the single highest point on the Outer Banks.   You can see the entire park as well as the markers on the ground, helping you realize just how important, yet how small everything really is.  This part of the Memorial is closed to the public but opens occasionally for special days and events.

6.  The Memorial Was The Original Selfie Spot.

In the 1940s and 50s the popular thing to do was to get dressed up in your Sunday best and take pictures in front of the commemorative boulders. Though this might seem strange to us today, it has to do with pride. Outer Bankers have always been a proud people, and for their home to be chosen as the best spot in the entire country to have the very first heavier than air flight, it made sense that they would go the most special spot in the world to have their pictures taken in their finest clothes. 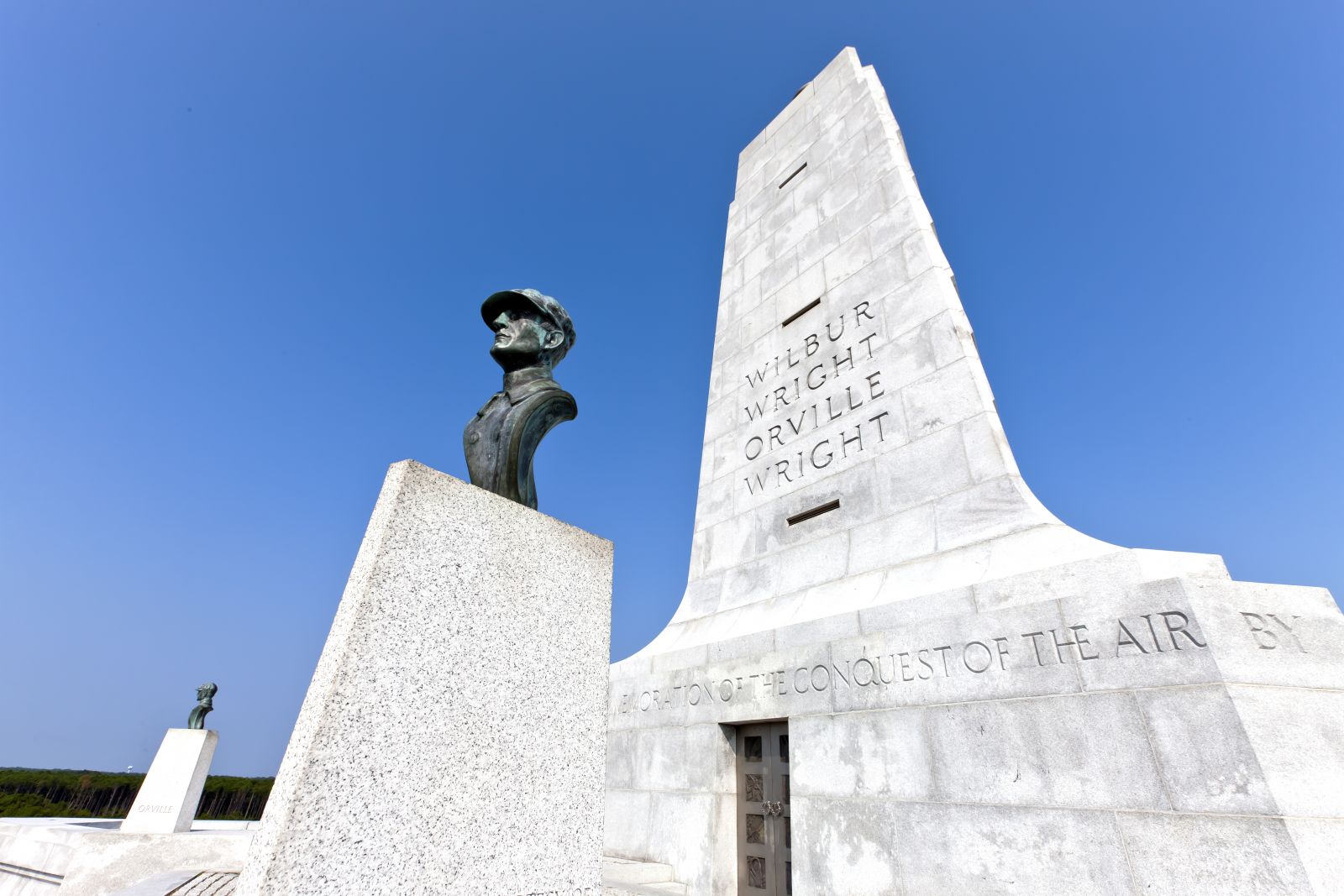 The entrance we use today from the main road, Route 158 was not always the entrance to the park.  The original access was from Colington Road. You can still find the original access flanked by cold war columns. However, there is a fence there now preventing entry from any route other than the main gate.

8.  At One Time The Inscription Was Highly Controversial

If you’ve ever been to the top of hill, you’ll notice there’s an inscription at the base. It says “In commemoration of the conquest of the air by the brothers Wilbur and Orville Wright, conceived by genius, achieved by dauntless resolution and unconquerable faith.”

The reason it was controversial was because it doesn’t actually say that the Wright Brother’s invented heavier than air flight. This was a constant problem in the years following the famous ‘first flight’. Though the brother’s gained fame and were given many awards for their achievements, none of the early awards acknowledged them as the creators of heavier than air flight. It wasn’t until 1940 that people (and honors) first started  to recognize the brothers as aeronautics’ true inventors.   There is still much controversy as to whether the states of North Carolina or Ohio (the Wright Brothers’ birthplace) can claim to be the “First in Flight”.

9.  The Flyer At The Monument Is Not The Original

The original plane that actually performed the first flight in Kill Devil Hills is now located inside the Smithsonian Air and Space Museum in Washington DC.  However, it almost never made it there due to the fact that the Smithsonian originally refused to recognize the Wrights accomplishment as the creators of heavier than air flight.  Orville Wright (the only surviving brother at the time) sent the plane to England where he felt it would be displayed properly.  Upon learning that they would lose the opportunity to the aircraft to a museum overseas, the Smithsonian pleaded and agreed for the Wright Flyer to be displayed alongside Langley’s flyer. Orville refused and threatened to burn the plane rather than ever let the Smithsonian have it after showing so much disrespect. It wasn’t until 1947, after two subsequent curators and a purging of Langley’s work from the ‘practical’ side of aviation did Orville agree to finally send his flyer to the DC museum.  Though many said he would have preferred to have the original flyer at his monument in North Carolina, Orville’s premature death ended the debate. The last wishes in his will said the flyer was to go to the Smithsonian. The flyer displayed at the Wright Memorial here on the Outer Banks is a replica.

10.  Many Famous People Have Visited The Monument

Thousands of visitors tour the monument and grounds every year. Each year on December 17th a special celebration is held that marks the anniversary of the Wrights’ first flight.   This celebration brings in aviation fans, military personnel and even a few celebrities.   Actors such as John Travolta and President George W. Bush have made appearances there. As have astronauts Neil Armstrong, Buzz Aldrin, and Chuck Yeager. American aviation pioneers, Ruth Nichols and Amelia Earhart also visited the monument during their lifetime. All wanted to see where it all began.

Bonus Fact: The Wright’s Patent Made Them Rich And Famous Men

People think the Wrights invented the airplane. That’s only partially true.  Airplanes with similarities of configuration to the ones the Wrights flew were already in existence. However, they simply didn’t work. They lacked both a way to lift off from level ground and a way to control them once they were in the air.

The Wrights invented a system that helped the plane not only lift off, but remain in control once airborne. This was the true turning point for both aviation and the Brothers. To this day, there is no better system for controlling flight than the one the Wrights invented in 1903. Even in modern aircraft, the systems are all just updated variations of the Wrights original system. Thanks to their patent, the Wrights received 20% on the sale of every new aircraft regardless if the buyer was commercial, private, or even the government. 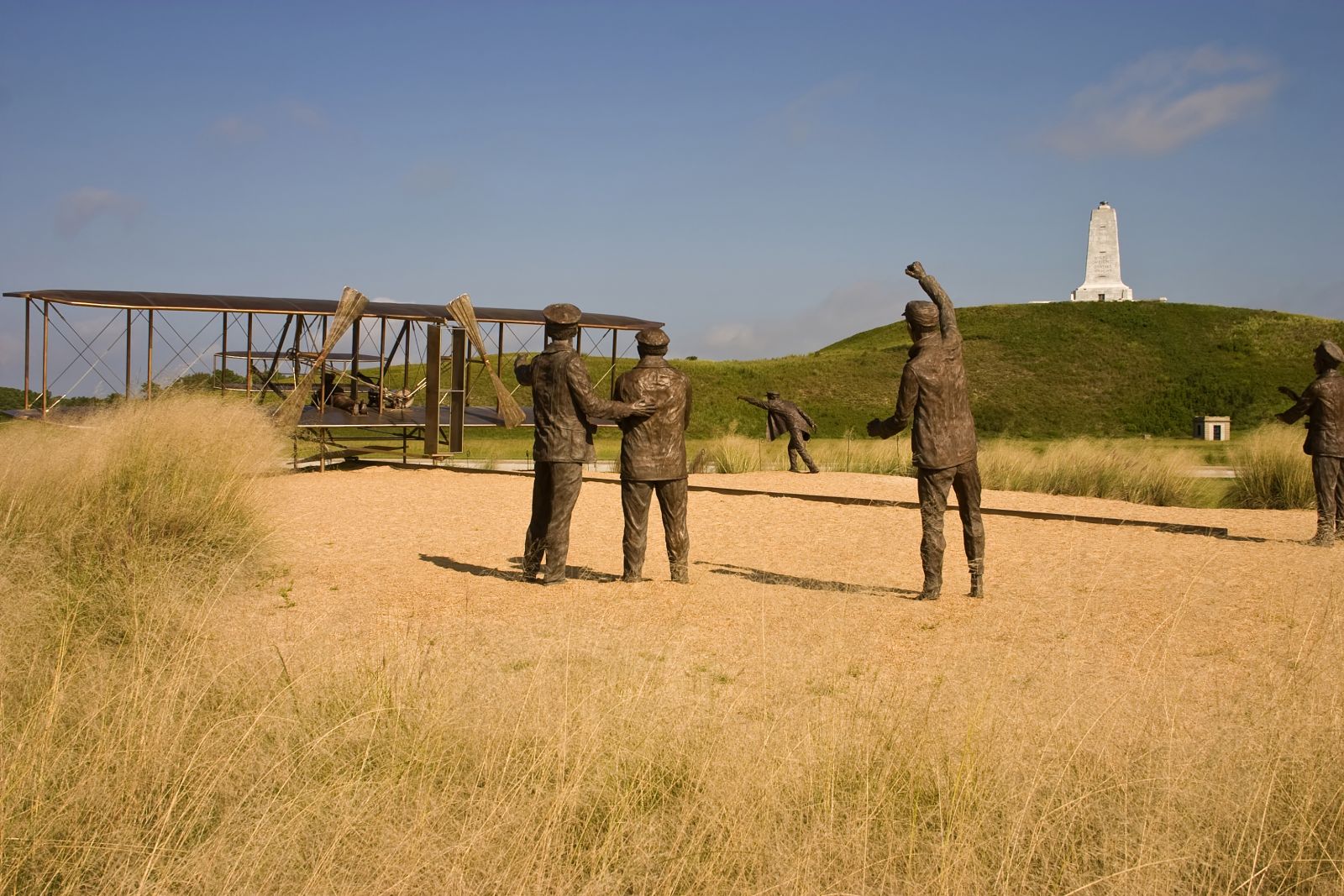 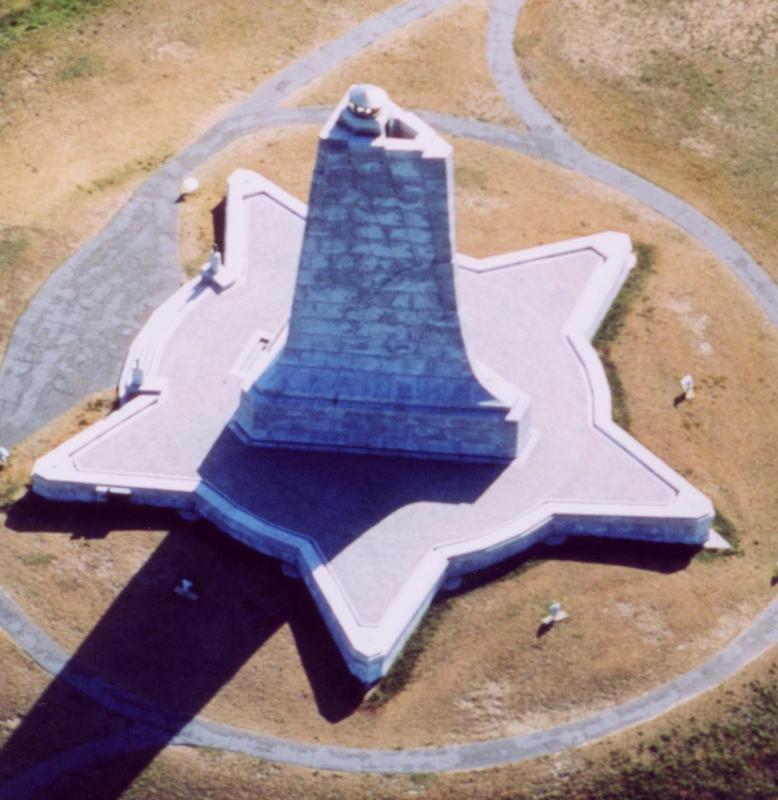 The Outer Banks is a special place, something the Wright Brothers knew only too well. So if you’re ready to visit and learn a little more about our history, give us a call today!