One of the most famous attractions in the Currituck Outer Banks are the wild horses.  Many visitors love seeing the horses roam free on the beaches as there are very few places in the world to see something like this, but where did they come from? What role did they play in in local history? This article will share twelve fun facts weâ??ve dug up about the wild horses.  Don’t miss them on your next OBX Visit!

They Are Descendants of Spanish War Horses

The horses are said to have arrived some time in the 1500’s. At the time, Spain was still in the process of conquering the New World.  They brought horses with them via boat. One of these boats started to sink, and the extra cargo was jettisoned to lighten the load. The ‘extra cargo’ in this case, were the horses. The horses came to shore and started their own herd. They found a ready made food supply in the beach and marsh grasses and plenty of fresh water in small ponds.  The reason these horses have such a mild temperament is because they were literally bred to it. Calm horses, ones that can remain unbothered by the sound of swords, cannons and guns, work best in war. This is why Outer Banks Horses just stand there while cars and people swarm around them. Keep in mind though, that even though they are extremely calm, they are still a wild animal, and you never know what they are going to do. Therefore, it’s best to stay at least 50 feet back as per the law.

Jockey’s Ridge Gets its Name from Them

Jockey’s Ridge was once used as a racetrack by the locals. The earliest known reference to this is in the mid 1700’s. Back then, locals used catch the wild horses and race them around the ridge. The large dune served as the grandstand so everyone could watch the race (and bet on their favorites.)

They Used To Roam From Ocracoke to Carova

Outer Banks horses (also known as ‘Banker Ponies’) used to roam free on Ocracoke Island, Hatteras, and the northern part of the Outer Banks including Nags Head, Kitty Hawk, Kill Devil Hills, and Duck, with herds numbering in the thousands. As more people moved in, the herds dwindled until the only wild horses remaining are the ones in the four wheel drive area in Carova.  (Ocracoke has a ‘pony pen’, but those horses are no longer considered ‘wild’.) 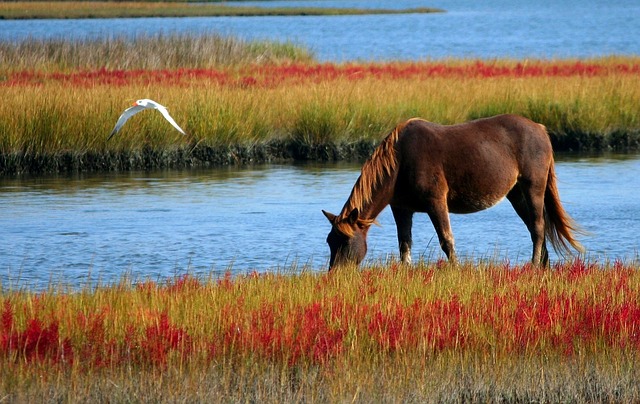 Until the year 1985, there was no paved road in Duck, North.  This enabled the horses to move to Duck as the other areas became more built up. It wasn’t unusual to see horses standing beside house on the gravel road they used to have. However, once the road came in wild horses were soon getting hit by cars on a constant basis. In 1995, the wild horses were relocated to Carova, the only remaining part of the Outer Banks without a paved road.

In The Early Part of the 20th Century, They Were Classified As ‘Free Roaming Livestock’

The National Park Service actually doesn’t like the wild horses. From a conservation point of view, they are considered a non native invasive species, like kudzu or lionfish.  In the early part of the 20th century, they had the wild horses reclassified as ‘Free roaming livestock’. This gave anyone the legal right to catch and keep the wild horses for their own, leading to the decimation of the herd from thousands to a few hundred. Since then, the horses have been reclassified and protected. It is now illegal to get within 50 feet of one.

After the horses were deemed ‘free roaming livestock’, Ocracoke came up with a unique way of corralling the horses. The local Boy Scout troop had a chance to earn a very special badge. All they had to do were capture and domesticate one of the wild horses. Then, they got to keep it as a pet. All the boys in Troop 290 earned this badge and became the only mounted Boy Scout troop in the country. They made an appearance at all local and Boy Scouts parades.

They Are Managed By the Corolla Wild Horse Fund

In 1989, a group of volunteers got together and created what is now the Corolla Wild Horse Fund. This privately owned non-profit looks after the well being of the horses.  Part of herd management includes keeping the numbers in check both through birth control darts, and through adoption. If a horse is sick enough to need a vet, the Wild Horse Fund removes the horse from the herd and makes sure it gets veterinary care and well as relocation. They also advocate for the wild horses, catching the attention of lawmakers and the media to ensure the horses have what they need to thrive.

They Are the State Horse

This was something the Wild Horse Fund has worked on for a while. Much more than just ‘bragging rights,’ having the Corolla Wild Horse named state horse gives the horses protection and funding otherwise not available to them. In 2010, Governor Perdue signed the bill into law which not only made them the state horse, but elevated their status to something other than an ‘invasive species’.

You Can Adopt a Horse 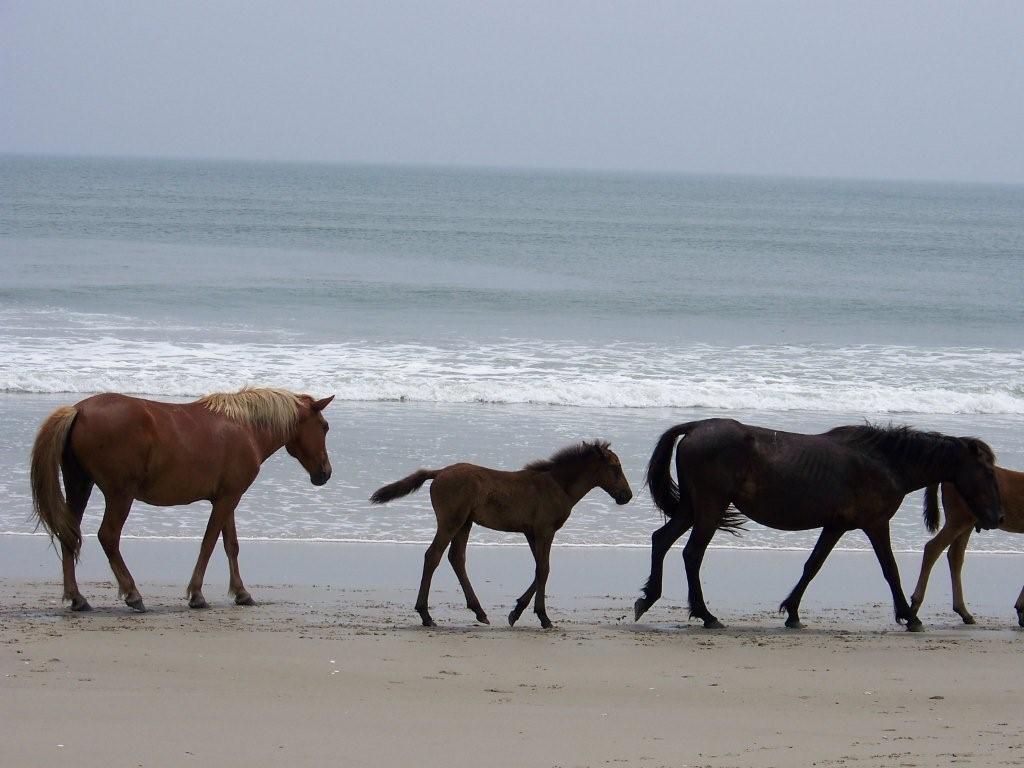 When a horse has a medical problem or becomes too used to humans they must be removed from the herd. Babies born in a banner baby year also are removed. These horses are then trained, saddle broken and ready to be adopted by horse lovers. Being purebreds, they come with papers proving their Spanish Colonial Mustang heritage, enabling them to be entered in shows and making them suitable to breed. It costs surprisingly little to adopt a horse, under $700. However, the vetting process is rigid to make sure the horses are well taken care of.

Though Outer Banks horses certainly have the ability to jump, it would never occur to them to do so. These kinds of horses have to train to jump, otherwise, they simply don’t. True, they might jump if a predictor was chasing them, but due to their calm temperaments and the fact that they have no predators, the odds of them of figuring this out on their own are nonexistent. Once a horse is removed from the herd, one of the first things it’s taught to do is jump.

There Are No White Horses

Have you noticed that all Outer Banks wild horses are some variation of black or brown? Though they may have white spots, marks or socks, the horses have no ‘white horse gene’ in their bloodline. This makes it impossible for any horse in the herd to give birth to a white horse (with the exception of a true albino, which has never happened here.)

Gus Is a Transplant

Though there’s a big emphasis on keeping the bloodline pure and foreign horses out (Which is why you can’t ride horses on the beach in the four wheel drive area) this makes for an inbreeding nightmare. In order to ensure the bloodline is diversified, a new stallion,  Gus, was introduced from Shackleford Banks in 2014. The wild horses in Shackleford are genetic matches to the ones in Corolla. However, while the Corolla horses came from only one maternal line, the horses in Shackleford come from three. This ensures that the bloodlines will stay diverse enough to not have inbreeding issues.

Seeing the Wild Horses of Corolla provides a treat for people of all ages. The best way to see them is with a horse tour. Not only do the tour guides know where to find them, they also tell interesting facts about the area. Fortunately, with our Fun N Sun pass, you get one free ticket each and every day of your stay.