Jockey’s Ridge is made up of almost 30 million tons of sand and is the tallest living natural sand dune system in the Eastern United States. But as much as everyone loves the Ridge, there are still some facts not widely known about it. So here are some strange facts about everyone’s favorite mound of sand.

The Name Comes From The Wild Horses

The name “Jockey’s Ridge” dates back to 1753, in a grant to John Campbell, though back then they called it ‘Jockey’s Hill’. Though some speculate that the name came from a family called ‘Jackey’s’, the accepted explanation is a lot more fun.

The Outer Banks has a long history of shipwrecks. With those shipwrecks came people, and the horses. These horses became known as ‘banker ponies’ or the ‘wild horses’ that everyone loves today. Back then, wild horses were meant to be tamed. Brave individuals would capture a wild horse and teach it to race, similar to the organized races on the mainland. Jockeys’ would then be selected and these tamed horses would race around the ridge. The large sanddune itself acted as the bleachers, where people would go and watch the races and often bet on the outcome.

The Ridge Is On The Move 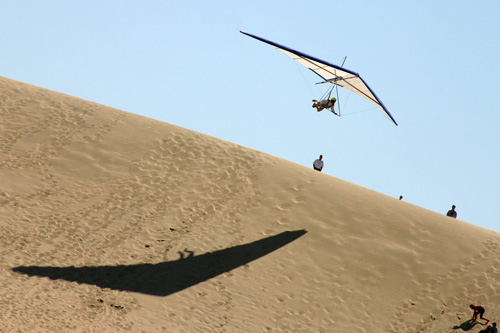 Jockey’s Ridge is what’s known as a ‘living dune’ which means it’s changing constantly. Every season, it’s size and shape changes. It also varies in height from 80 feet to well over 100 feet. You just never know what it’s going to be when you see it. The reason for this is the maritime winds shifting the sands.

However, there are two reasons the ridge doesn’t entirely blow away. The first reason is because the just under the surface, the sand is wet and remains forever wet. Wet sand is nearly impossible for even hurricanes to move without the assistance of massive flooding. The second reason is because of the winds themselves. In the summer the winds blow from the southwest, while in winter, they blow from the southeast. This keeps the massive hill mostly in one place over time. I say ‘mostly’ because there have been a few structures that have disappeared under the moving mound of sandâ?¦

It Swallowed An Old Hotel

In the late 1800’s, there was a grand hotel built at the base of the Ridge.  It was designed for the crÃ¨me de la crÃ¨me of society, with  three stories, a banquet hall, bowling alley, and so much more. Visitors, as well as all their stuff, were taken to the beach via donkey cart. Donkeys were used because they are better at moving over sand with carts than horses are. Then, the ridge started to cover the hotel. At first, it was not a big deal. Then, the upper classes stopped coming because of the shear amount of sand. The hotel lowered it’s rates and would rent to anyone. In the final year of the hotel’s life, discounts were even offered if you were willing to dig your way to your room. Shovels were provided by the hotel. Eventually, the ridge covered it completely.

David Stick, notable Outer Banks Historian, used to tell a more personal story about the hotel. He used to say that when he was a young boy of about 10, he and his friends used to explore the ridge.  One day, after a storm, they discovered a door. When they opened the door, the found themselves in a long hallway lined with doors. Each door led to a room, but most rooms were full of sand. As little boys often do, they made this hallway their ‘clubhouse’ and came often to play in it. He said it was always cold inside the hallway. One day, after another storm, he and his friends when to play in it and the door was gone buried beneath the sand. No one has seen the old hotel since.

It Swallowed A Mini Golf Course 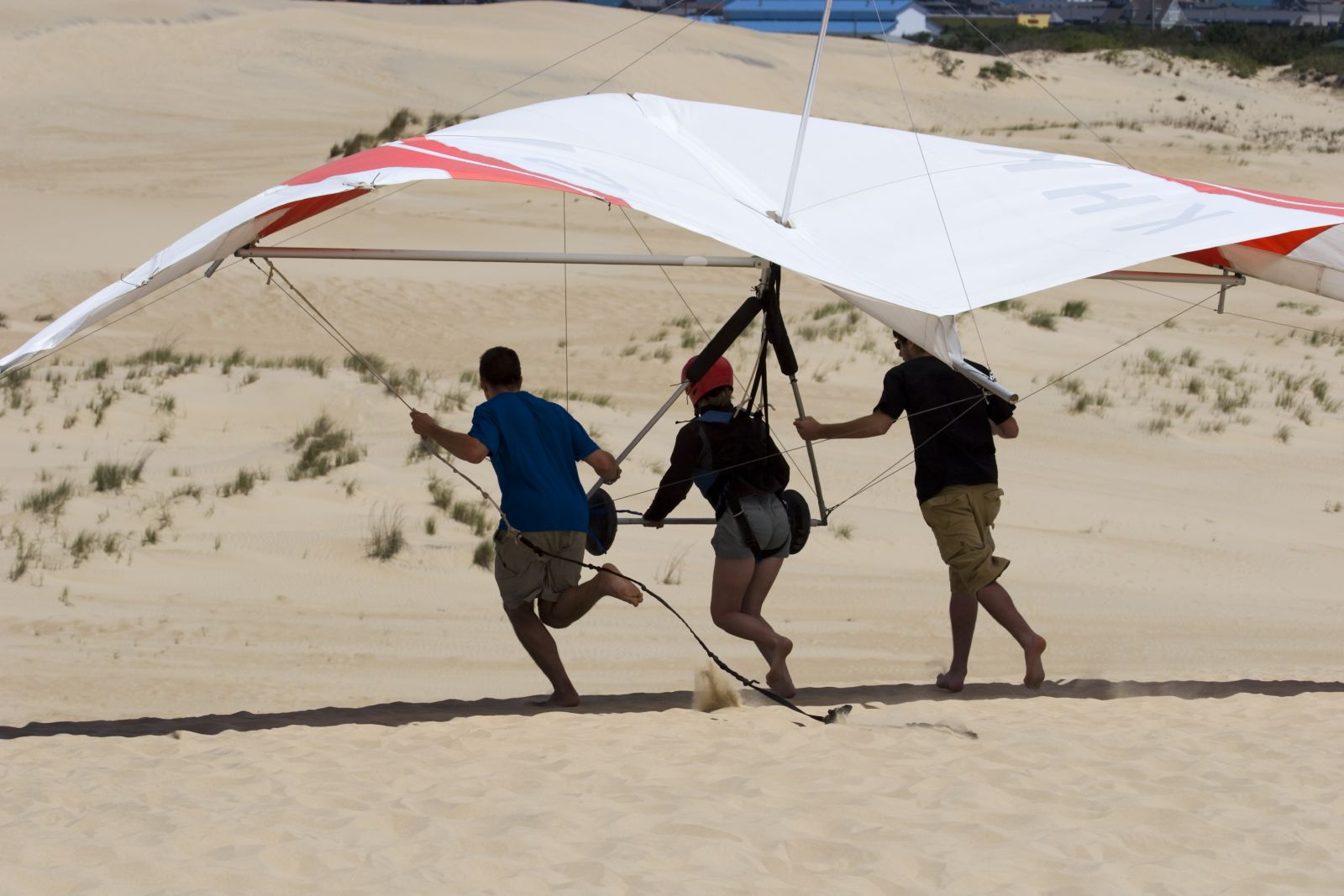 In the 1970’s, there was a mini golf course next to the ridge. It had an octopus, a blue shark, a castle, a treasure chest, a small boat and some other features. By the mid eighties, Jockey’s Ridge started to encroach on the golf course. At first, it was just tiny sand drifts. Then, it increased exponentially. The owner tried to haul away the sand, but since the sand was state park property; he wasn’t able to do it for very long. The park eventually bought the golf course and let the ridge engulf it.

The owner sold off the attractions in pieces. The octopus went to a shell store in Manteo. Unfortunately, neither the Octopus nor the shell store is there any longer. The shark went to Bob’s Bait and Tackle Duck, where it was given new teeth and a new paint job. (It used to be blue, then yellow, now pink) The other attractions left the area, all but the castle. It stayed on the forgotten course until the ridge eventually buried it. Today, you can still see the castle, and other pieces of the golf course poking out from beneath the sand. Take a picture when you do see it, because eventually, that castle will go the way of the old hotel, never to bee seen again.

Estimates say this sand dune is about 7,000 years old, give or take a year. It’s the biggest all natural sanddune on the east coast. However, in the 1970’s it almost disappeared. Back then, it wasn’t a state park yet, it was a just 30 million tons of sand.  Developers came in with a plan to haul the sand away, use it as fill, and build houses. They even had everything all drawn out with plans they gave to the local government for approval.  For a while, it looked like it was really going to happen, that the Outer Banks was going to have say ‘good bye’ to Jockey’s Ridge.

But the locals weren’t about to let that happen. They formed a group; People to Preserve who sent out an SOS (Save Our Sanddune). People ‘bought’ a square foot of it for $5, with all proceeds going to save the ridge.  Locals and visitors alike ‘bought’ pieces of the ridge. The running  joke was that the buyers liked to walk up the ridge, find their ‘square foot’ and stand on it. In 1974, thanks to these efforts, the development of the ridge was stopped. It was designated a National Natural Landmark and Jockey’s Ridge Park was born.

Not Everyone Was Happy When It Became A Park

While many applauded the transition of Jockey’s Ridge into a park, the state did make some changes that not everyone was happy with. The main change was that you could no longer drive vehicles up the dune to picnic and play at the top. Sure, you can still picnic and play, but you have to walk up the dune with your stuff to do it.

The other drastic change was that they didnâ??t’ want a business operating inside the park. This was bad news for Kitty Hawk Kites, who had already settled in and made their money giving hang-gliding lessons by using the ridge as a jump off point. On the entire Outer Banks, there was no other place that was high enough to work. After a great deal of negotiation, the state agreed that Kitty Hawk Kites could still use it for their business as long as certain conditions were met. Kitty Hawk Kites agreed and kept their business.  They also got an added advantage; you need to meet so many requirements in order to be allowed to hang-glide off the dune, no other company competes with them for that.

You Can Find Fulgurites (But Not To Take Home)

Fulgurite is type of formation that happens when lightning hits the sand. Because the lightning is so hot, it actually melts the sand and turns it into glass. Fulgurite in this part of the world are small, rarely reaching over one foot in length. This is due to the wet sand of the ridge. Wet sand dissipates heat quickly which makes larger ones impossible, except in the cases of an unusually long drought.

In the movie Sweet Home Alabama, they showed Fulgurite that looked like glass sculpture. However, Outer Banks fulgurite looks more like a hardened plant root. It almost never looks like glass because the loose sand around it fuses to the surface and darkens, which gives it it’s more thick root-like appearance.  Fulgurite is fun to find, but unlike shells on the beach, they need to stay on the ridge. So take some selfies with them and leave them on the sand.

You Can Bring Your Dog

Like most state parks, your leashed dog is welcome on the Ridge and on the beach behind it.  If you are going to the Ridge with your dog, keep in mind that the sand can be dangerous for paws during the hottest part of the day. The best time to go to the Jockey’s Ridge with your dog is in the early morning or evening, when the sand is cooler. It’s also a good idea to bring water for your dog as well for yourself, as it’s a long walk to the top even on the coolest days.

When you first look at it, it looks like the least accessible place on the planet. After all, it’s nothing but soft sand and no real paths straight to the top. There’s no way even a beach wheelchair could make it up that high. However, Jockey’s Ridge isn’t just a huge mound of sand, it’s also a state park.

And as a state park, accommodations have to be made for the mobility impaired. If you call the park about 24 hours ahead of time, they will make arrangements to drive you to the top in a special vehicle. They will check your handicapped placard when you arrive, so be sure to bring it.

Jockey’s Ridge is one of the many wonders of the Outer Banks. Between its history, it’s natural beauty and its myriad of things to do, (especially the new waterpark,) a visit to the Outer Banks is something you’ll want to start planning today. We can help with accommodations and suggestions with things to do.